Do we die when we teleport? 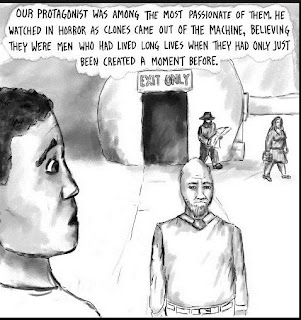 What implications are there though if the machine malfunctions and there's a 10 minute delay before your body is disintegrated? Apart from this, the teleporter works, and the replica is still created at the time it should be. So, for 10 minutes there will be 2 versions of you. As part of your ongoing experiences, you might still seem to "jump" to the destination booth. However! Equally possible is that you seem to remain exactly where you are. If the latter pertains, then how would you feel about your impending disintegration 10 minutes hence?

Well, of course, one would be horrified. One would typically presumably think this shows the copy is not actually you -- it is merely a copy.

To insist, nevertheless, that the replica is not a legitimate continuation of the original person is, therefore, to deny that one's physicality wholly determines one's self. That there must be something over and above one's total physicality -- a soul or whatever. But this then is a straightforward denial of materialism.

So materialists cannot deny that a physical replica would be you, it is simply incompatible with all forms of materialism to maintain this.

But do we have a paradox here? In the case of the malfunctioning teleporter, what if you do not appear to "jump" to the destination booth but remain exactly where you are? How can the replica, therefore, be you?? Is this then a paradox? No, not for the materialist.

Imagine the following scenario. Imagine that every infinitesimal fraction of a second you are getting teleported from place to place. Obviously, if you keep your eyes open, you'll just see a confusing blur. But you could close your eyes, and everything would seem to be normal. You could be thinking of a problem, daydreaming, or whatever. Nothing would seem different as compared to when you have your eyes closed normally, except in the teleportation scenario you are continuously being killed and spontaneously coming into being every infinitesimal fraction of a second!

Now, if we suppose that precisely this is happening in our second by second everyday existence then there is no paradox for the materialist, at least not in this regard. We do not actually exist from one second to the next -- a persisting self, and indeed a self, is an illusion. It merely seems we have a continuous existence.

To see why I believe such a momentarily existing self is incoherent, see my following blog entry:

Does the self as opposed to a mere "sense of self" exist?


Also, see an entry from my other blog where it seems that Buddhism shares a similar belief:
Buddhism and a persisting self

Finally, the following webcomic featuring a teleportation machine might be of interest.

Update 2/8/17: Just posted an essay on the same topic written by a certain Charlie Huenemann who is professor of philosophy at Utah State University. He comes to the same conclusion as me. It might be useful to read if people didn't find me sufficiently clear.
If I teleport from Mars, does the original me get destroyed?
By Ian Wardell at June 22, 2017