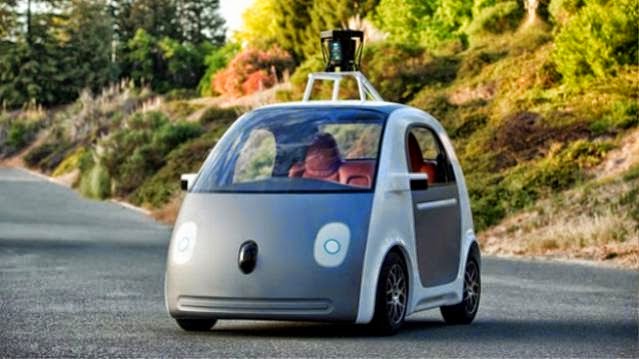 I tend to pooh pooh predictions regarding new technology and how it will utterly revolutionise our lives. And it seems to me such predictions have a very poor track record.

But I think self-drive cars -- more specifically those that do not allow humans to take over control -- will eventually completely replace human driven cars and utterly revolutionise the world.

Which is not to deny there will be many problems to solve before we get there. For one thing they'll initially encounter a lot of resistance due to the fact that many people -- predominantly men -- just simply love to drive. In addition we presumably will see a mixture of self-drive and human driven cars on the roads at first, and this will create formidable problems. And what of problems such as kids jumping out in front of the cars to see them automatically stop! And I question whether a car which looks like one that Noddy might drive, such as the google self-drive car depicted in the photograph above, will ever become popular.


So ironing out all the problems will take a great deal of time, and we're talking here probably of a few decades. But I'm going to be bold here. I predict that by 2060 no one will drive cars any more on public roads. And practically no one will die any more on the roads.


But the biggest issue with the Google car is one that has bedeviled computer researchers for as long as computers have been around: how to endow the machines with the sort of everyday knowledge that humans acquire and use from childhood on.


It's going to be incredibly difficult -- albeit not impossible -- to endow them with that sort of knowledge because they are not conscious and never will be. But presumably people were aware of all these problems. I myself hint at them above.

I certainly don't agree it will never happen. A mixture of normal and self-drive cars will be very problematic. But all cars being self-drive is altogether a different issue. But how do we get to the scenario whereby all cars are self driving without going through the problematic situation of both normal and self-drive cars being on the roads? Perhaps in reality there will be a gradually transition with cars becoming more and more autonomous until the point where they become fully self-driving.

I've just been having an argument with a certain James Burkill on facebook about what computers are capable of. The subject turned to self-driving cars. I showed him this blog entry. He said to me:


Tesla already have self driving cars on the market. And they already drive better than humans. They can see through fog. It can decide on the precise torque required for the forward or rear engine to maximise efficiency. Driving is a perfect application for a machine learning algorithm. There is no shortage of data.


In two years from now all car companies will be offering models with autopilot. By 2020 we will have cars without steering wheels or pedals. By 2022 there will be debates raging over whether we should allow humans to drive due to safety concerns. By 2027 humans will be banned from driving in most western countries.


So his prediction for when no one will drive cars any more on public roads is 2027, compared to my 2060. Quite a bit of difference! I think his prediction is hopelessly optimistic. There again I know virtually nothing about computers. But we shall see.

See 2 further blog posts I've made in my other blog on this topic:

Often it's extremely hard to decide what is the rational thing to believe.

It's extraordinarily difficult for most of us to decide what the truth is on many contentious issues. Will we witness catastrophic clima...