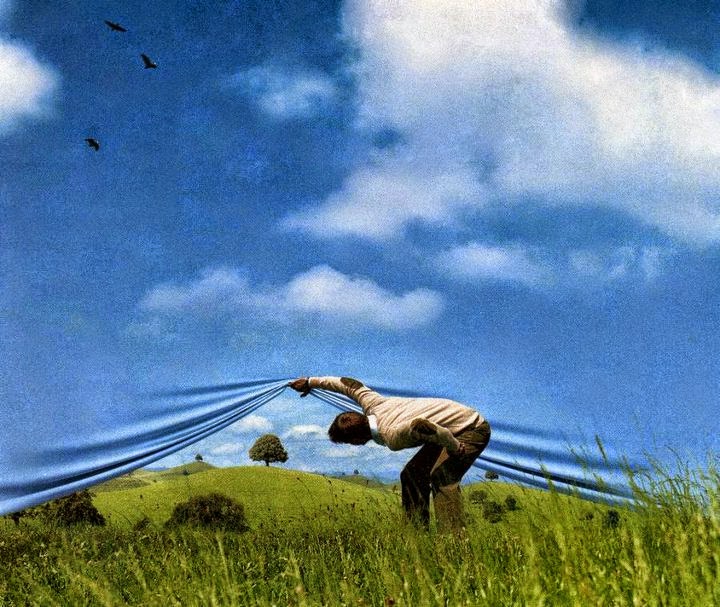 For the past couple of years I've increasingly been thinking how strange the world is.  For example, the fact we live on the surface of a huge ball floating in the midst of an infinite sea of nothingness.  It seems vastly more reasonable to me if we had, instead, found ourselves living on a plane; perhaps one infinite in extent in all directions.

Indeed I’ve even begun to wonder if we might not live in a virtual simulated world created by aliens living wholly "outside" our Universe.  This can be compared to the bots (computer controlled players) in a computer game at some point in the future becoming conscious and wondering if their world (game environment) has a creator.  We know that their creator – the computer programmer – is not some entity existing within their world; that is, unlike the bots themselves, the programmer does not equate to some pixels in their game environment. Rather the programmer exists “outside” of their reality altogether.

Similarly, might it not be the case that our world -- our Universe -- is likewise a creation of aliens living wholly “outside” of our reality?  Perhaps their Universe is utterly different; after all they live in the "real" world.  Perhaps the creation of our Universe is just a huge experiment on their part. Perhaps they monitor everything we do and say. Perhaps it might even be the case that they are conducting a kind of psychological experiment to see how long it will take before we twig on that our reality is artificial.

Or perhaps the creator is not some being or beings living in another Universe “outside” of reality, but rather what we traditional conceive of as “God”.   A Mind, perhaps infinite in scope, being responsible for the creation of our world, and even perhaps responsible for its second by second existence.

See this programme for example from about ~39 minutes onwards.

And this extract from a TV programme 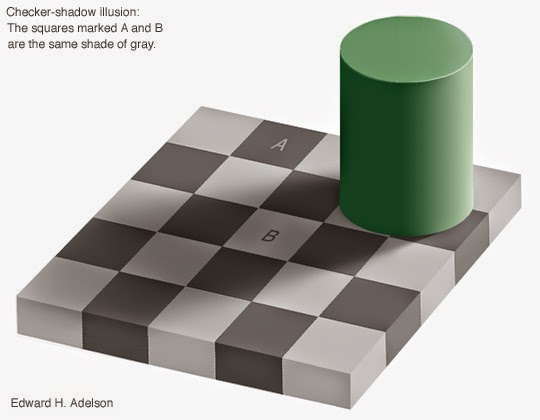 I'm sure that all of us are astounded that the squares A and B are actually the same colour. It is the shadow cast over B by the cylinder which makes us think otherwise. What this suggests is a quite incredible illusion.

However I think there is a pervasive naivety about the nature of perception. Most of us doubtless feel that we see the external world directly. But we emphatically do not.

The answer lies in the fact that we do not in fact simply passively see what is out there. Rather the brain performs certain operations on the data coming through our senses and presents it to our consciousness in a form that we can make sense of. Everything we ever see is in fact a hypothesis about how the world is. Thus we have an implicit theory about the external world that it contains objects which have specific intrinsic colours. Hence the brain will perform those operations which ensure that objects do indeed appear to be the same colour throughout daylight hours.

This applies not just to colours, but everything we perceive through our 5 senses. In a way then everything we ever perceive is an illusion. But I think this is misleading.

Let's consider the "illusion" above again. If this were a real 3D object and we were to approach it and view it from various angles, then we would see that squares A and B are very different colours. Indeed their intrinsic colours would be precisely as we perceive them in the illusion above.

But in that case what justifies us in labelling it as an illusion? If this were a real object that we are seeing, then squares A and B are very different colours. Our senses are not deceiving us. Indeed if someone claimed to see the squares as being precisely the same colour, then it is doubtful that he could proficiently visually apprehend his environment.

This is not to say we never perceive illusions. Sometimes we seem to see something, but which on closer inspection turns out to be something else entirely. Or sometimes what we seem to visually see is not consistent with our other senses.

Edited to add:  I have a follow up to this post written many years later:  The Checker-Shadow "illusion" Part 2.
By Ian Wardell at March 25, 2011 10 comments:

After death will we be subsumed into a universal soup of consciousness?

After death I don't think our individual selves or souls are subsumed into a universal soup of consciousness, which I regard as being cl...